It’s been such a crazy ride, I feel… I’m already at 20 wks and 5 days, halfway there. It’s even more surreal as I’m feeling the baby move around – especially when i’m sitting down and leaning forward. It’s like the baby’s protesting… “give me more space!!!”. Of course, nothing compares to the day we finally found out whether it was a boy or a girl – or 85% so…. hahha!

Boy or a girl?

So, Wednesday finally arrived for us to find out what the gender was.

Everyone who knows me knew that I wanted a girl. Since the second trimester arrived, I couldn’t help but read the supposed signs. For those of you who don’t know, the Chinese have a lot of “sign reading”… and I couldn’t help but think… mmmm I have pretty good skin.. no nausea (but then this could be entirely genetics) and I’m hating meat… it must be a girl! It doesn’t help that I actually had a dream that it was a girl… that’s not something I’d usually do.

Of course this was all foolishness and, in reality, who knows how accurate all this stuff is. But still… I couldn’t help but hope. It was extra hard to see all my friends come back saying “it’s a boy” and me hoping I could break the weird cycle of boys. God had better plans I guess… especially for us. But then again.. maybe i’m still holding on to that little hope that it could still be a girl.

So yeah… the day finally arrived to do the gender ultrasound. I followed the instructions to a tee. By 10:10am emptied my bladder. We left around 10:30am and by 10:40am, I had to gulp down 32oz of water – which didn’t turn out to be very difficult. Lastly, we had to arrive at the ultrasound place by 10:50 (which was extra easy and we were even early). Not too long after we arrived, we got called in.

The technician started the ultrasound. Andrew got to watch all of it while i tried very hard to be still. The baby was so stubborn. It refused to move from its comfy hammock space. All the baby did was move its arms, bend itself in half – legs to the chest (totally my flexibility) – and played around with its fist – trying to figure out how to put it in its mouth. Finally after awhile, and a bit of conversation, the technician said:

“well it looks like it may be a boy”. My first reaction was a bit of a stunned and stupid “how is that?”…and the technician looked at me in wonder and said something like “you don’t know the difference?”

Not really appreciating that… I guess what I really wanted was proof.. and so she showed me. But of course with some reserve she said…
” because the baby doesn’t seem to want to move from its position, this is the best photo or view I could get but here’s what looks like a boy part”.

I then asked, how many percent are you sure? And her response was “85%”.

Then she suggested for me to empty my bladder . With 32oz of water in me, I was definitely ready. She also suggested for me to jump around.. bend over.. stretch and bend sideways to see if it’ll coax the baby into another position. It was actually a good time to get away. I was definitely feeling down. I guess I was hoping so much for it to be a girl that I didn’t know how to react when I’d find out it was a boy. I knew also that Andrew was probably sad because I was sad and let-down that it ended up being a boy. While in the bathroom I partially hoped the gender would change. Of course.. that, as well, was foolishness.

When I finally climbed back onto the bench, the technician started again and, like before, the baby was in his comfy space.. not having moved much. Trying to work around it, the technician did all that she could do and told me that there may be a small possibility I’d have to come back. She said it would be totally up to the doctor or the person who read the recording whether or not all the anatomy check was good enough for them to ok this ultrasound attempt. Part of me was hoping i’d have to go back and part of me was okay with not knowing for sure.

When we left, we were given the photos. We walked to the elevator and awaited our afternoon appointment with the doctor. During this time, we got to talk and apparently Andrew said he had to keep very hard from smiling too much because he saw other moments where it looked positive that it was a boy. He said the technician completely missed it because I was distracting her. He also said, he didn’t want to be too obvious about his smile because he knew I would be sad and disappointed. To be honest, he was right. I was selfishly disappointed. He knew that and even tried saying “who knows it could still be a girl”.

To make myself feel better.. we walked to the giftstore at Mary Birch Hospital for Women & Newborns. I knew there was a small giftshop where I could buy a blue stuffed animal to take photos with. While we walked I called my mom as Andrew was already getting responses on the photos he already posted up on Line. At the giftstore we found this cute little elephant. Honestly, because of how cute it was, it started making me feel better. 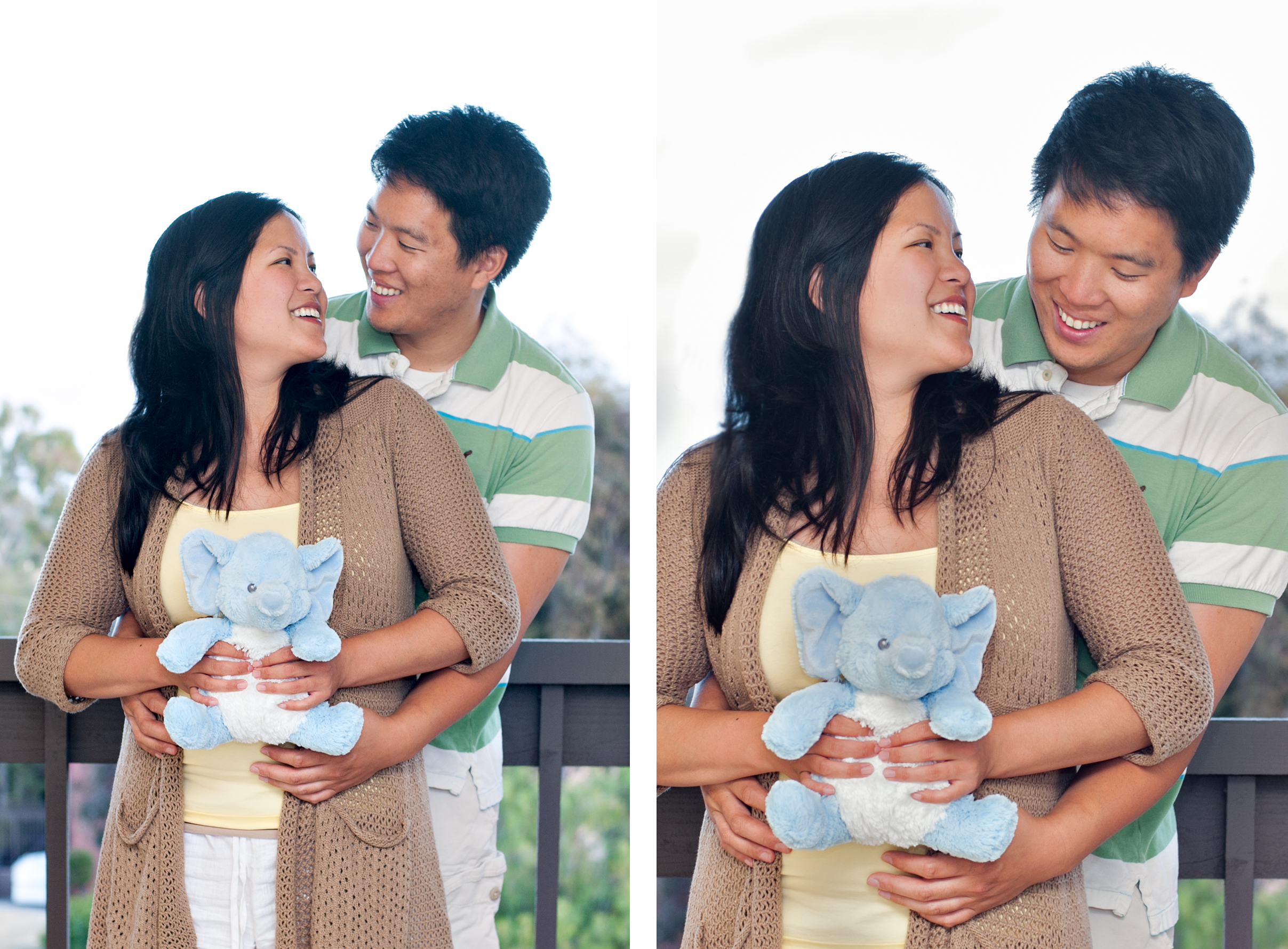 It’s a boy, as long as it’s healthy that’s the most important thing.

In the end, it really is true that the most important thing is that he’s healthy. And soon enough, in October we’d be able to meet you… We’ve actually even thought of names already but I guess I’ll keep that a secret for now. 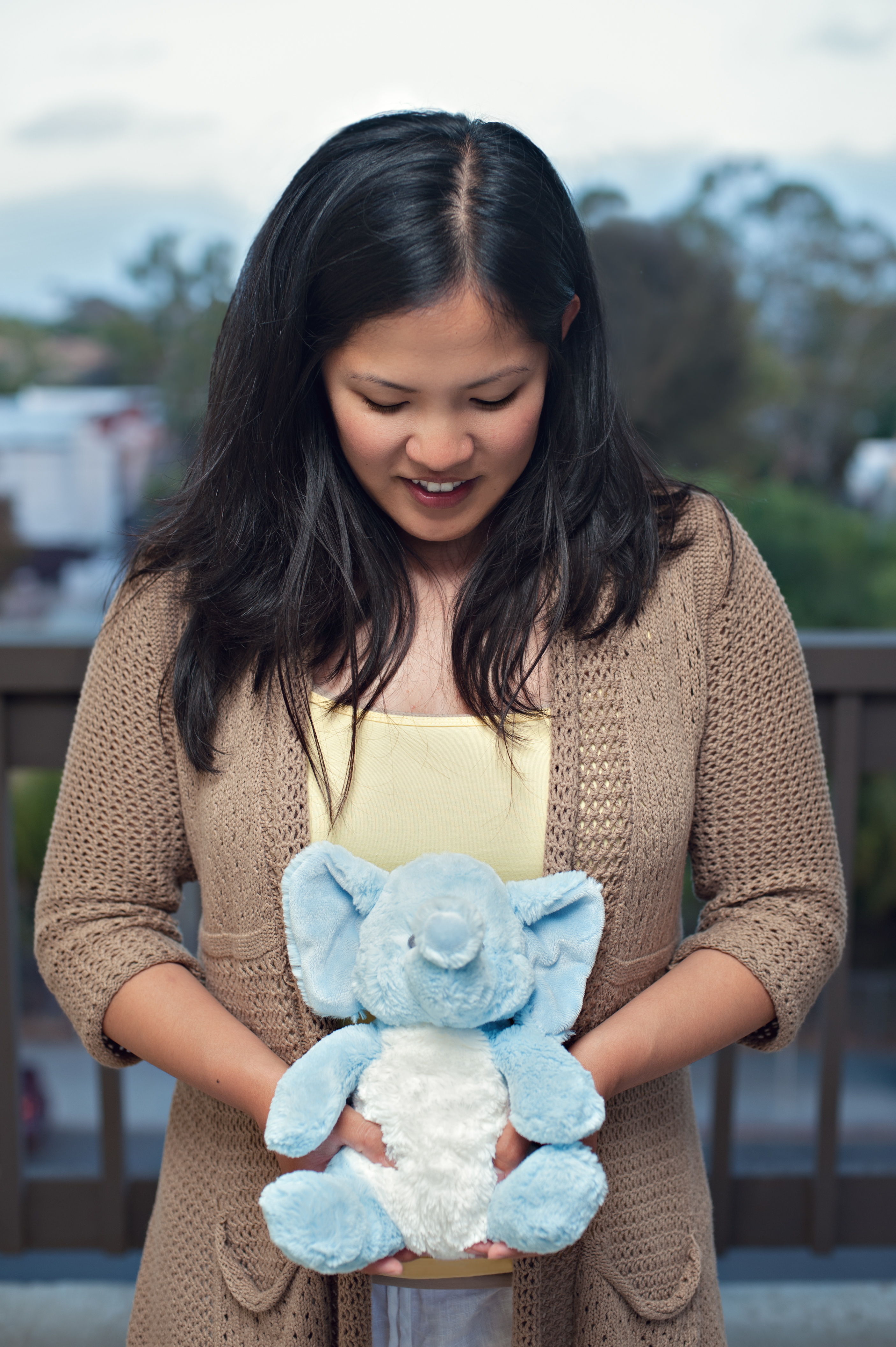